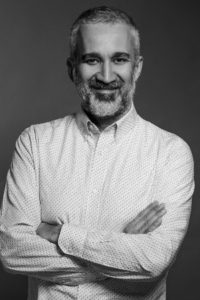 Ahmet Akın graduated from German High School in 1988. His undergraduate degree is from Business Administration Department of Boğaziçi University and his MBA degree is from the Simon Business School at University of Rochester. He started his advertising career at Güzel Sanatlar / Saatchi & Saatchi and held the position of Vice-President at TBWA which he joined afterwards. In 2009 he became the CEO of Leo Burnett Group in Turkey. He currently is the Founding Partner of Kramp Advertising Agency.

Ahmet Akın was the President of Advertising Foundation in 2010-2012 and also served as the Board Member of Self-Regulatory Board of Advertising during that period. He also worked as an Instructor at the Graduate Program of Marketing Communications (Brand School) of Bilgi University between 2013-2017.

Along with his advertising career he is the designer and moderator of Co-Creation Workshop which he has been conducting for corporate teams and NGOs.