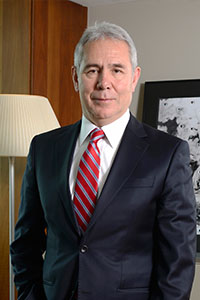 Akkök Holding- Chairman of the Executive Board

Born in İstanbul in 1953, Ahmet C. Dördüncü graduated from the Business Administration Department of Çukurova University and furthered his studies with post-graduate programs at Mannheim University and Hannover University. Starting his professional career at Claas OHG in Germany, Mr. Dördüncü worked at Mercedes Benz A.Ş. in Turkey from 1984 to 1987.

In 1987, he joined Sabancı Group and undertook several different responsibilities at Kordsa A.Ş. until 1998. That same year, he started work at DUSA, one of the Group’s companies, as General Manager/Chairman of first DUSA South America, then DUSA North America. After serving as the President of Sabancı Holding Strategic Planning and Business Development Group in 2004, he served as the Chairman of the Executive Board of Sabancı Holding between 2005-2010. Mr. Ahmet C. Dördüncü has been Chairman of the Executive Board of Akkök Holding since January 2013 and serves as the Chairman of the Board of Directors of Akenerji, Akcez, Akiş REIT, Ak-Kim and GizemFrit. He also serves on the Boards of Directors of Akkök Holding and various Akkök Holding Companies. Mr. Dördüncü is a Board Member at International Paper Co. Dördüncü also serves as the President of the Board of Directors of the UN Global Compact Network Turkey.

He is fluent in English, German and Portuguese.