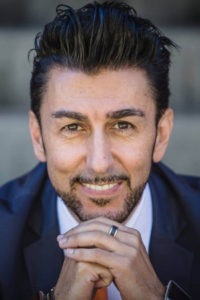 Bibop Gabriele Gresta is on a mission to inspire you to change the world. He is a world-renowned speaker, featured at the World Economic Forum, The United Nations, TED Talks, and other global conferences. Gresta is a respeopcted activist in Transhumanism and Ethical Entrepreneurship, specializing in mass market community building and project design, and is currently focused on human mobility. Gresta partnered with Dirk Ahlborn, CEO and co-founder of Jump Starter, Inc. as COO and Chairman and co-founder of Hyperloop Transportation Technologies, Inc. Now, as Chairman of HTT, he coordinates a team of 800+ professionals in 40 countries. HTT was the first to begin development of the Hyperloop™, and is the largest company ever built upon a collaborative business ecosystem. Gresta brings to HTT his knowledge as a developer, a venture capitalist, and inspirational business leader. He co-founded the influential startup incubator Digital Magics SPA, responsible for the start-up of more than 70 companies, in 2004 and served as its venture partner. He then pioneered the venture capital market in 2011 with two stock listed companies in U.K. and Germany with investment of more than 70 million pounds (net asset value of more than 100 million).

At age 15, Gresta became Software Development Director for the multi-national Alpha Center International (Italy), leading a team that developed a disruptive super-learning system implemented in several nations. While still in his teens Gresta became a formidable producer, host and author of hit TV programs on Italian national television, founding the content production and distribution company Bibop, S.p.A. Within the company’s first two years it reached just under 4.25 million Euro in revenues. In 1999 he sold 40% of Bibop, S.p.A. to Telecom Italia for just under 6 million Euro, creating one of the first successful case histories of Italy’s new media.