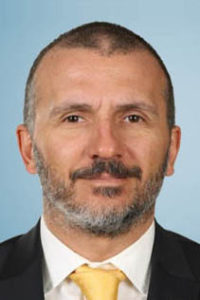 Since beginning of 2013 he is the CIO of Mercedes Benz Türk A.Ş. (MBT), istanbul Mr.Bezmez who graduated from Boğaziçi University with bachelor degree in Mechanical Engineering in 1993, has a MS degree in Operations Management at Michigan Technological University (USA).

He began his professional career in 1996 participating in the A.T KEARNEY Management Consultancy as Associate Consultant. In 1998, Mr. Bezmez joined Mercedes Benz Türk A.Ş. as Project Manager. After 3 years there, he moved Stuttgart to work at DaimlerChrysler as IT Analyst. In 2003, he returned back to Turkey to work at Mercedes Benz Türk A.Ş as IT Manager responsible for Processes & Applications Bus and Truck Team. In 2010, he moved back to Germany, Mannheim to take the responsibility as the Global Head of Order and Production Steering in Daimler AG/Evobus. During this period, he has taken over various responsibilities as SAP system templates owner for all Bus production locations worldwide. After 3 years of management experience in Head Quarters in Germany, Mr. Bezmez has been assigned to the CIO position of Mercedes-Benz Türk A.Ş in 2013. Today, he is responsible for business optimization and development of the following fields with respect to processes, applications and technical infrastructures; common processes and HR processes, Bus production plant in Istanbul, Truck production plant in Aksaray, marketing sales and after sales for all Daimler products, Mercedes Benz Used Vehicles and Mercedes Benz Finansman Türk A.Ş. and also establishment of a new global IT Hub for Daimler AG in Istanbul with a target of 150 Mio € savings within 3 years.