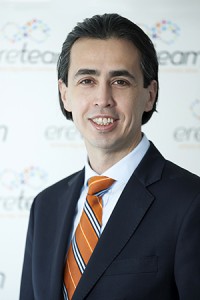 He began his career as Technical Assistant Manager at Siemens – Nixdorf in 1992, and he worked in HP between 1994-2008. He started his career in HP as HP Turkey Environmental Science Brand Manager, then became the HP MEA Corporate Clients Sales Manager. Between 2001-2009, he worked in different managerial positions in EMEA and MEA regions. Between 2009-2012, he worked as SAS Turkey General Manager, and then between 2012- 2014, he was the County Leader of IBM Turkey Software and Cloud&SaaS Sales Leader of MEA Region.

As General Manager at Ereteam, Gökhan’s areas of expertise include hardwares, softwares, channel and direct sales, product marketing, business developlent, consulting and education. In addition to these, he has expertise in sectoral information needs analysis, projecting and sales processes of banking, public, telecommunication, insurance.