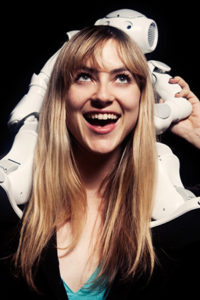 Heather Knight is the founder of Marilyn Monrobot, which features comedy performances by Data the Robot, the annual Robot Film Festival and a one-off Cyborg Cabaret. Her current research involves human-robot interaction, non-verbal machine communications and non-anthropomorphic social robots. She was named to the 2011 Forbes List for 30 under 30 in Science and is featured for her Robot Comedy performances on TED. Her work also includes: robotics and instrumentation at NASA’s Jet Propulsion Laboratory, interactive installations with Syyn Labs (including the award winning “This too shall pass” Rube Goldberg Machine music video with OK GO), field applications and sensor design at Aldebaran Robotics, and she is an alumnus from the Personal Robots Group at the MIT Media Lab.