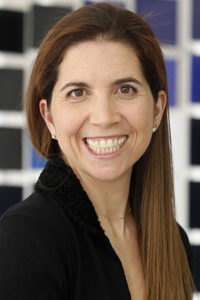 Nuria Oliver is a computer scientist. She is Director of Data Science Research at Vodafone and Chief Data Scientist at DataPop Alliance. Previously, she was Scientific Director at Telefónica and a researcher at Microsoft Research. She holds a PhD from the Media Lab at MIT, and is an IEEE Fellow, ACM Fellow and elected permanent member of the Royal Academy of Engineering of Spain. She is one of the most cited female computer scientists in Spain, with her research having been cited by more than 15,000 publications. She is well known for her work in computational models of human behavior, human computer-interaction, mobile computing and big data for social good.

Nuria graduated with a degree in Telecommunications Engineering from the Universidad Politecnica de Madrid in 1994. She was awarded the Spanish First National Prize of Telecommunication Engineers in 1994.

In 1995 she received a La Caixa fellowship to study at MIT, where she received her doctorate at the Media Lab in the area perceptual intelligence. In 2000, she joined as a Research in the area of human-computer interfaces for Microsoft Research in Redmond USA and worked there until 2007.

In 2007 she moved to Spain to work at Telefónica R&D in Barcelona as Director of Multimedia Research, the only female director hired at Telefónica R&D at the time. Her work focused on the use of the mobile phone as a sensor of human activity, and worked there until 2016.

In 2017 she joined Vodafone as Director of Data Science Research, and also was named the first Chief Data Scientist at DataPop Alliance, an international non-profit organization created by the Harvard Humanitarian Initiative, MIT Media Lab and Overseas Development Institute devoted to leveraging Big Data to improve the world.

In 2018 she was elected permanent member of the Spanish Royal Academy of Engineering.