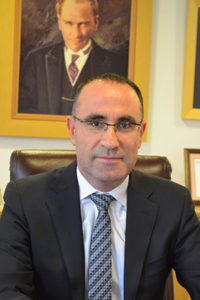 Ramazan Yön graduated from Middle East Technical University, Departmant of Mining Engineer in 1998 and earned his Master of Health and Safety from Gazi University in 2010, after Gazi University he earned his second Master Degree of Business Administration from Bilkent University in 2018. He began his professional career as a Field Engineer at Park Enerji, Ankara in 1998. He worked at Park Enerji – Ciner Group for more than 13 years, as Assistant Project Manager, Site Manager, Deputy Project Coordinator, Sites Monitoring Manager and General Manager respectively. From 2002 to 2005, he worked as LTO Assurance Advisor and LTO Assurance Coordinator at BP/BTC Co. for Turkey Operations. He start to work at Demir Export A.Ş. as a Production Director in 2014. Assuming the role of Production Director of Demir Export A.Ş. he has appointed as General Manager in 2017. He has been serving as a General Manager since March 1, 2017. Mr. Yön also serves as a board member in Demir Export A.Ş., He is a chairman of the board in DEFAŞ and also executive committee member of Demir Export A.Ş. – Fernas inşaat A.Ş. Joint Venture. In addition to being a Board Member of shareholding structure in Demir Export A.Ş., Mr. Yön also serves as a Board Member in a number of industry-specific non-governmental organizations. Councillorship and Mining Committee Member of Ankara Sanayi Odası, Member of Board of Maden İşverenleri Sendikası, Member of Board of Türkiye Madenciler Derneği. He has advanced English. Married and father of two children.