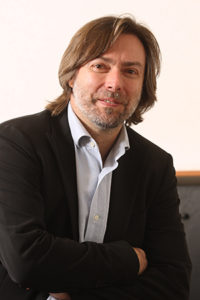 He is an example of the T-functions Peter Hinssen promotes because, he started in IT, was IT manager of the year (Large Organisation) in 1997 with his first internet banking solution in Europe, became general manager It distribution after the merger in KBC.

He transitioned to business functions and became general manager Marketing KBC-Belgium. He also was responsible for the sale and carve out of CENTEA, FIDEA after state support and for redefining the strategy and finance planning for KBC Belgium within the KBC group afterwards.

Today, he is the group CIO for KBC, where he personally leads the transformations of the IT department;

– from IT centric towards Customer centric organization and fit for scale

– from frozen to fluid organization; changing the smell of the place

and he enjoys sharing his experience with colleagues and partners.

January 2014 he won the CIONET Belgium Best Speaker of the Year award. His presentation “The Changing Role of the CIO”, given at the 2013 CIONET Belgium annual event, obtained the highest score on the base of all conference feedbacks compiled for the past year. (http://blog.cionet.com/2014/01/31/cio-rudi-peeters-is-our-best-speaker-of-the-year-2013)

Rudi studied at and began his career at the University of Leuven, where he set up the Biometrics practicum for Master of Sciences and conducted statistical analyses of PHD studies.