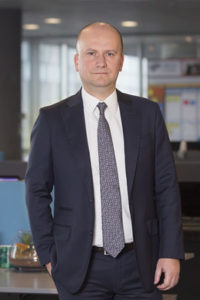 Serkan Öztürk joined Turkcell in 2000 as Project Supervisor. In August 2017, he was appointed as the Executive Vice President of Customer Experience and Information Technologies. Previously, he worked as project supervisor and manager at Turkcell Project Management office between 2000-2009. He served as Chief Information Technologies Officer in Astelit between 2009-2010 and in Turkcell Superonline between 2010-2011. Prior his to his last appointment, he served as director of Customer Relations Management and Business Intelligence Solutions (CRM & BIS) and Executive Vice President of Information and Communication Technologies. Serkan Öztürk graduated from Middle East Technical University Electrical and Electronics Engineering department. He received his MBA degree from Istanbul University.